PIQUA, Ohio (July 30, 2019) – As Dayton Area Chamber member Honda approaches its 40th year of production in the U.S. this September, the company also celebrated its 60th year of production in America this past June. Committed to building “… products close to the customer,” to date, Honda now operates 12 major manufacturing facilities nationwide and works with over 600 suppliers across the U.S. 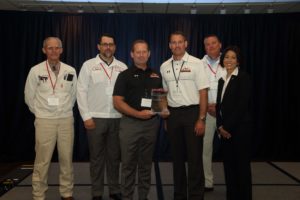 Honda recently honored the top one percent of their suppliers, honoring just 22 out of 2,200 suppliers for an assortment of quality and performance achievements. PSC Crane & Rigging (PSC) and Honda are proud to announce that PSC, another DACC member, is among the esteemed group. On June 12th, PSC received the “2019 Indirect Procurement Supplier Award” at the annual Honda Indirect Procurement Supplier Conference—held at the Bridgewater Banquet and Conference Center in Powell, Ohio.

In a statement released by Honda of America Manufacturing, Inc. department manager of the North American Indirect Procurement Department, Monica Oliverio emphasized: “Our suppliers and business partners make us a stronger company, helping us realize innovation and advancement by delivering the benefits the marketplace has to offer. This complimentary and valued relationship is an important part of our mutual success.”

PSC Executive Vice President, Randy Sever, echoed Ms. Oliverio, highlighting a relationship that has enhanced both companies’ missions and success over the course of a more than 30-year working relationship. “When we started working with Honda, a global leader in automotive production, we knew we had to raise our own bar of excellence; if you want to work in that arena, you have to step up your game.” Mr. Sever added, “Over the years, that has helped to shape our company in a very positive way, both in terms of our growth and offerings to clients as a company.”

The relationship, said Mr. Sever, has allowed PSC to recognize opportunities and invest in equipment, innovation, technology, and, most importantly, their people and their continued training and focus on safety. “To better serve Honda over the years, we’ve gotten better; we’ve helped each other and honored one another. And none of that would have been possible without the continued dedication, commitment, and safety-first culture exhibited every day by our staff.”

PSC President & CEO Jim Sever added, “Honda is one client that I believe every skill set and asset type has been utilized with over the history of our relationship. We’re extremely grateful to have had the opportunities to perform the execution of so many significant and complicated projects for Honda of America Manufacturing, Inc.

In considering the scope and scale of such projects, Mr. Sever confirmed his brother Randy’s position that PSC is only able to achieve such success because of the people behind the work. “It’s truly an honor to receive such a prestigious award. It’s a testament to the dedication our company and every team member has made to performing our services professionally, with our core values of trust, honesty, dignity, and respect always top of mind.”

PSC Crane & Rigging was founded in 1933 by Earl F. Sever Sr. The company primarily focused on demolition and plant dismantling at first, but soon moved into the machinery moving, rigging, and crane rental industry. Earl Sr. focused on establishing long-term relationships built on the foundations of trust, honesty, and hard work, which were instilled in his son, Earl F. Jr., and grandson, Earl F. Sever III—values that, to this day, drive the company’s continued success.

Now in its fourth generation, with Randy and Jim Sever at the helm, the two brothers continue the mission of “It’s About Time” in exceeding customer expectations through the use of cutting-edge tools, state-of-the-art equipment, a 100/0 safety culture, and expertly trained and certified personnel—whose mission it is to optimize operational efficiencies that limit downtime and give the customer the most uptime possible while work is performed.

Headquartered in Piqua, Ohio, PSC operates offices in the Dayton region as well as Columbus, Ohio.

A message from Honda: Congratulations on receiving Honda’s 2019 Indirect Procurement Supplier Award, an achievement that ranks your team among not only the best Honda indirect suppliers, but among the best indirect suppliers in the world.

As part of recognizing the 22 indirect suppliers that earned awards, Honda issued a press release with the list of recipients. This is a rare exception to Honda’s policy prohibiting suppliers from publicizing their business with Honda.