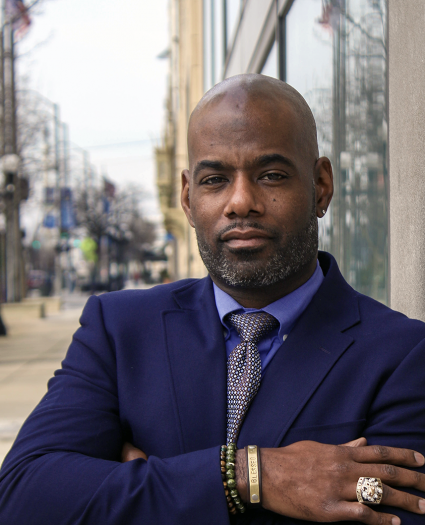 An advocate for community connections and building relationships, LaVar brings to the chamber more than 10 years of experience coaching and working in our community.

LaVar’s background is certainly unique! He was selected in the 2002 NFL Draft by the Pittsburgh Steelers, and eventually made his way to the Cincinnati Bengals. After his time with the NFL, LaVar spent six season playing in the Canadian Football League (CFL), where he was a recipient of the Heart of a Legend award for leadership and service.

After retiring from professional football, LaVar pursued a lifelong passion of working with youth by creating the Glover Youth Program, which provided residential programming and mentoring for foster kids and vulnerable populations. In 2011, his work as a tireless mentor was recognized when he received the Mentoring Collaborative – Mentor of the Year award.

In each of his endeavors, LaVar keeps his focus on giving back to his community. Before assuming his role at the chamber, he served as the Director of Self-Sufficiency for the Miami Valley Community Action Partnership (MVCAP). During his time with MVCAP, LaVar was instrumental in developing synergy and awareness around the ‘Getting Ahead’ and ‘Bridges Out of Poverty’ initiatives in the Dayton region. Those programs effectively assisted families in need, and received national attention for exceeding participation goals. LaVar is also an active board member for the Miami Valley Nonprofit Collaborative and is co-founder of the Football 101 for Women, which is an annual fitness boot camp that supports breast cancer organizations & initiatives.

LaVar has a beautiful partnership with his wife Ivy, who is the Director of Social Impact at Wright-Patt Credit Union. They have five intelligent and athletic sons. When he’s not helping the region’s business community, LaVar can be found playing golf, reading, or spending quality time with his family.