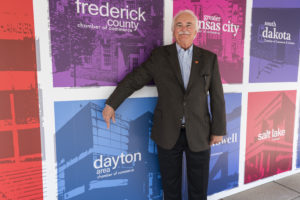 “We’ve had a close relationship since day one,” said Phil Parker, president & CEO of the Dayton Area Chamber of Commerce. “President and Chief Justice of the Supreme Court William Howard Taft, a Cincinnati native and great-grandfather of former DACC Board member and Governor Bob Taft was the Founding Father of the organization in DC in 1912.”

While chambers of commerce are independent bodies, close working relationships are important to ensure the voice of the business community is heard. The Dayton Area Chamber has worked to create and maintain open communication with other chambers of commerce within the Dayton region, the state of Ohio, and beyond.

Today, the U.S. Chamber’s headquarters in Washington is undergoing a restoration. The historical building dates back to 1922 and sits at 1615 H Street NW, just across the street from the White House.

While visiting this week for a meeting, Parker noticed signage around the building that went up when the restoration began. The signage recognizes the more than 7,000 chambers of commerce across the country. It didn’t take him long to spot Dayton.

“We are shown not once, but twice,” Parker said. “It’s a great acknowledgement to our organization and long term partnership.”

So, the next time you’re in Washington, keep an eye out for a piece of Dayton, on display at the U.S. Chamber of Commerce.