Kershner: Federal Reserve, be careful of impact to small businesses 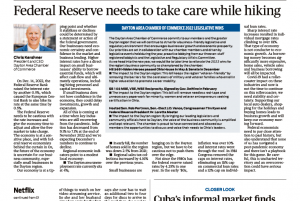 On December 14, 2022, the Federal Reserve Bank raised the interest rate by another .5%, which caused the European Central Bank to also raise its rate at the same time by .5%.

The Federal Reserve needs to be cautious with the rate increases and give the economy time to adjust and allow the free market to take charge. The economy is at a sensitive place and with federal reserve economists behind the curtain in Oz, the future of the economy is uncertain for our business community, especially small businesses in the Dayton region.

Our economy is at a tipping point and whether it stabilizes or declines could be determined by a statement or action of the federal government. Our businesses need economic certainty and confidence in the market and business lending. Higher interest rates have a direct impact on small businesses’ ability to borrow essential funds, which will affect cash flow and ultimately operations, including hiring personnel and capital investments. If small business does not have confidence in the economy, they could delay investments, growth and expansion.

All of this is coming at time when key industries are still recovering from the pandemic. Inflation has decreased from 9.1% to 7.1% at the end of November 2022 and we’re expecting December’s numbers to continue to decline.

Small businesses are hanging on in the Dayton region, but we have to be cautious not to push them over the edge.

Not since the 1980’s has the federal reserve raised rates by 4.25% in one year.   In the early 80s inflation was over 10% and interest rates went through the roof.   In 1981 Congress removed the caps on interest rates, eliminating an 18% cap on commercial loan rates and a 12% cap on individual loan rates.

Sharp interest rate increases resulted in individual mortgage rates climbing to over 18%.   That type of economy is not conducive to economic growth.  As borrowing money becomes significantly more expensive homes sales, vehicle sales and business borrowing will all be impacted.

Covid-19 had a rollercoaster impact on these industries and now is not the time to continue on this rollercoaster, we need stability and certainty. Supporting our local auto dealers, shopping for the holidays and buying homes leads to business growth and will keep our economy moving forward.

Federal economists need to pay close attention to past history, but also understand that none of us have navigated a post-pandemic economy and there isn’t playbook for this game. Be careful, this is uncharted territory and an overcorrection could have serious impact.

Download a PDF  of this article as it appeared in the Dayton Daily News.