Don’t Be Greedy: A Guide to Networking

“Network, network, network.” That’s the message we’ve all been hearing from business people throughout our lives. Sure, networking may help you find that valuable client, or get you the next big job, but let’s take a moment to discuss the less talked-about benefits of networking, and why they might just be the most important ones.

It’s easy to become misguided and think of networking as a one-way street that leads to simply your benefit. In fact, if you’re approaching it with that idea, people can sense it a mile away as you’re circling the networking group like a hungry, greedy shark with a business card. Nobody wants to network with the person who is only looking to get with no intention of giving.

So what’s a better way to network? That’s simple. Be authentic. Sure, some of us may be more comfortable talking to strangers than others, but ideally you want to be approaching members of your networking group the same way you would when you’re meeting new friends. Think about the last time you cooked up a great friendship with someone. How did that happen? Did you find you both liked similar things? Maybe the conversation just flowed? Or every time you’re around this person you both just get to laughing. In the end, neither one of you were looking to selfishly gain something and then walk away with a prize. You instead both realized that together, you create a mutual exchange of friendship, and you both feel better around each other. 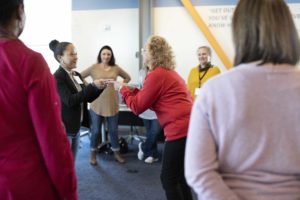 This is the approach you also want to apply to your networking groups. Be you. Do not try to throw out a bunch of business jargon or sales numbers you think would impress people. Instead, be polite, friendly, and authentic. Maybe you see the person you’re talking to has a Bengals keychain and you’re both sports fans. Follow that conversation. Or get the discussion flowing by asking them how they got started. Be genuine and enjoy the conversation. After you’re done, maybe you’ll discover this person you were talking cars with is a big player in a firm you’ve been looking to do business with, and now they like you and think you are a great and authentic person and THAT’S the type of person they are looking to do business with.

Benefits Beyond the Sale

But remember, networking isn’t just about finding jobs and making sales. Be careful if you’re looking at it through that lens. There are many other benefits of networking that improve your overall quality of life and make you a better person.

Depending on the specificity of your networking group, you may already be in the company of other like-minded individuals. Now maybe you just relocated for a job and don’t have a lot of friends in the area yet. Instead of just trying to climb the corporate ladder, you may find someone who can go golfing with you on the weekends, or recommend a great place for you two to get your nails done after work. Because you innately met this person at a networking group, they’re likely to be professionally-minded as well. So while you’re golfing or hanging out, you’re talking about obstacles in your career, or running a new sales pitch by them, generating new ideas, or helping them face a professional challenge that you also faced. Now, you don’t just have a new client, you have a new buddy who cares about your professional success and will help sharpen your skills outside of the office. They say it’s better to fly with the eagles than cluck with the chickens, so think about how many potential eagles could be added to your flock from your networking group.

I’ve recently found three people through networking who will join me at the gym. This one decision has added better health & fitness to my life, new friends to discuss business ambitions with, and a support group when life comes at me hard and unexpected.

Networking groups offer much more than meets the eye as long as you have your eyes open. Whether it’s meeting a new employer, or adding some professional comradery to your life, as long as you approach networking as a two-way street, you’re bound to find success.

Networking groups offer much more than meets the eye as long as you have your eyes open. Whether it’s meeting a new employer, or adding some professional comradery to your life, as long as you approach networking as a two-way street, you’re bound to find success. 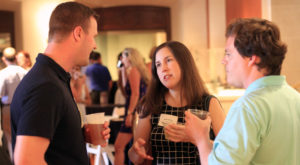 Check out some of our networking groups!

Empower: A 10-month cohort, blends professional business coaching with innovative curriculum and problem solving, designed exclusively for mid- to upper-level management women business leaders. It guides participants as they identify their own leadership strengths, values and goals, while empowering them to eliminate barriers to advancement.

Executive Dialogue: A forum for business owners and executives to discuss common and not-so-common business problems and solutions in a frank and confidential environment. Participants meet monthly in groups of approximately 10-14 people. Competitors are not placed in the same group, and non-disclosure agreements are required.

Executive Women’s Council: EWC provides support for women pursuing or in executive leadership roles by providing peer to peer networking, education, and professional growth opportunities. The council aims to provide a chance for these women to candidly share and discuss business problems, experiences and challenges with a diverse network of female leaders in the Dayton community.

Generation Dayton: GenD aims to connect and develop the region’s young professionals by providing them access to education, networking and community service opportunities. GenD encourages its members to build relationships with their peers as well as business and community leaders, all while developing the professional skills that open doors to career growth. Generation Dayton is cultivating a new generation of talent.

Leadership Dayton: A premier leadership development program designed to identify, educate and motivate a network of community leaders and increase their capacity to serve the Dayton region.