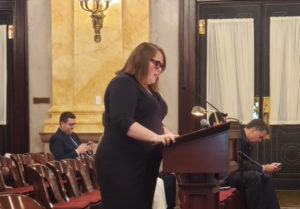 COLUMBUS, Ohio (September 25, 2019) – A bill that would provide easier access to education for our military families is making progress in the Ohio Senate. This week, the chamber’s director of public policy & economic development, Stephanie Keinath, provided testimony in favor of the legislation at the State House in Columbus.

The chamber believes this legislation will create a more welcoming environment for military families when they arrive in Ohio, and will encourage educational attainment and professional development for their families.